Smart traffic management is making our roads safer than ever before

Highways play a major role in private transport and logistics. Millions of people drive to work and millions of goods are transported via highways daily. The downside is that traffic still causes too many accidents, injuries and deaths. Millions are stuck in traffic jams, causing immense economic damage every day. Authorities and traffic planners have not yet found a solution for the manifold problems.

Key facts on global traffic (according to WHO)

• 1.35 million people die each year as a result of road traffic crashes

• 50% of all road traffic deaths among vulnerable pedestrians, cyclists, etc.

No wonder that the UN’s Agenda for Sustainable Development has set an ambitious target of halving the global number of deaths and injuries from road traffic crashes by 2020. Improving traffic safety is an ongoing challenge in which technology will play an increasingly important role. AI Video Technology is about to make Traffic Surveillance smarter and more effective.

These are just a few examples to show that there is much more in security cameras than just video surveillance. The possibilities are almost limitless, it’s worth thinking outside the box.

How smart cameras can help with Highway traffic management

Security cameras are designed to take videos and make it available for evaluation. To get more out of video surveillance, cameras need video analytics capabilities, for example, to distinguish cars from animals and analyze drivers’ behavior in real-time. In our Application Store you find a wide range of Apps, easy to install on Security Cameras to perform a variety of traffic management tasks.

Get to know our camera platform:

Azena has developed a flexible camera solution, including an Application Store with ready-to-use, smart traffic and parking apps.

Traffic on highways is highly dynamic and can change rapidly at any time. Speed limits to prevent traffic jams and accidents must adapt to changing conditions in real time. Static speed limits using conventional traffic signs and digital systems just counting vehicles reach their limits, especially during rush hours. CCTV cameras equipped with smart video analytics can “see” and do much more than conventional traffic sensors. 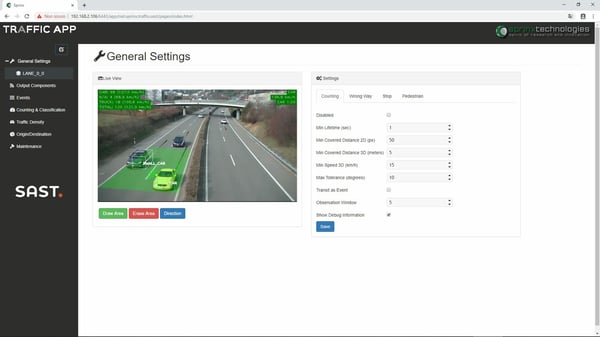 Learn more about and get TRAFFIC DATA Demo

Another example: FLOW Traffic is an App that turns your cameras into smart traffic sensors with built-in deep video analytics. The video clip below shows very impressively how smart cameras can simultaneously observe and analyze traffic flows and single vehicles from different perspectives (in this video from a drone). Unlike conventional traffic sensors, CCTV cameras allow large viewing angles, covering large areas to be monitored.

Learn more about and get FLOW Traffic

Breakdown vehicles, dropped cargo, vehicle parts and dead animals are a major threat to all road users, often unnoticed by authorities for a long time and removed only by chance. Surveillance technology can help detect anomalies on highways quickly and reliably so appropriate action can be taken. Smart video technology enables CCTV cameras to distinguish objects (that should not be on the road) from vehicles.

Example: Perimeter protection adds artificial intelligence to cameras by analyzing video content in real-time, extracting metadata, sending out alerts and providing actionable intelligence to traffic operators or other systems, such as traffic information systems to warn drivers in case of dangerous objects on the road. Besides objects and animals, the app also recognizes humans. Learn more about and get Perimeter protection

Accidents on highways are often dramatic, especially when vehicles catch fire or trucks with highly flammable cargo are involved. In case of fire on highways or in tunnels every minute counts. Incidents must be detected and reported immediately. Smart traffic monitoring helps speed up rescue by detecting incidents and analyzing threats 24/7.

Example: Semantive Fire Smoke Detection detects fire and smoke in various circumstances where it's hard to mount conventional smoke sensors. AI tirelessly monitors chosen scenes and alerts other systems or humans in case of any sign of danger. Combined with other camera apps, e.g. for detecting unusual vehicle movement patterns, accidents can be analyzed and classified according to various criteria.

Learn more about and get Semantive Fire Smoke Detection

Toll stations can become traffic blockers and cause traffic jams, especially at peak times, if vehicles aren’t processed fast and smooth. Therefore more and more toll gates are equipped with video license plate recognition. What many toll operators don't know yet is that CCTV cameras, available along many highways, can also detect license plates if equipped with specific video analytics software.

Example: NeuroCar LPR EU is a camera app designed for detection and identification of vehicles (car number plate) in motion. While license plate recognition at toll barriers is made for short distances, CCTV cameras equipped with NeuroCar LPR can recognize EU license plates at long distances and in motion. This enables authorized vehicles to be recognized early and directed into fast check-in lanes to reduce the overall occupancy.

Learn more about and get NeuroCar LPR EU

Equipped with NeuroCar LPR EU, surveillance cameras not only recognize license plates reliably, but also compare gathered video data with any database in one go. This allows to automatically determine a vehicles' country of origin, to detect those arriving from COVID hotspots and, if necessary, to take measures according to the hygiene regulations.

There are many ways to take Traffic Surveillance to the next level and make highway traffic safer & more enjoyable using smart video technology. Just have a look around our Application Store, you'll find the right application for your city. Get more out of your video technology now with just a few clicks!

How IoT Heroes at Azena Drive Self Reflection and Growth - Part 2: Impact Circles

AI + IoT = AIoT: What's in it for next-generation video surveillance?

Applications for security cameras: It's time for a revolution