If airport security is your top priority, you need smart surveillance

Security at airports has always been a top priority, and it should be. With the rise of AI-driven computer vision, not only surveillance can be taken to the next level. Here is how security cameras empowered with smart video analytics help redefine airport security and operations.

Challenges in airport security are changing

In the past, security managers were primarily concerned with global terrorism; today, COVID-19 threatens the health of passengers. Even if the number of passengers remains at a low level in many airports, surveillance won’t become any less complex. In fact, the opposite is true: Hygiene regulations raise new requirements for passenger processing and control. Reason enough for security managers to rethink airport security methods and evaluate how smart surveillance technologies can help meet new (and old) challenges better and more efficiently.

CCTV camera systems are already in use at all airports worldwide. Why not use existing infrastructure to get more out of video data? You can, for example, ensure social distance according to hygiene regulations or improve the visitor experience by reducing waiting times at security checkpoints. IoT cameras equipped with AI Video Analytics can do much more than just video.

We at Azena aim to bring the latest AI technology to IoT cameras enabling them to perform more and sophisticated tasks in airport security measures.

Our open IoT platform with Camera OS and Application Store for security cameras provides users and system integrators with the AI technology they need to get more out of each device.

Despite Corona, the fight against terrorism remains a key objective in airport security management. Where thousands of people gather, signals indicating terrorist activity are easily overlooked. When it comes to reliably detecting unattended luggage or people with weapons in crowds, video surveillance involving human operators reaches its limits. Smart video cameras can support humans in recognizing threats early and even perform tasks autonomously.

AI-Lost is an AI camera app designed to detect lost objects abandoned in specific areas such as airports, stations and public spaces. AI Video Analytics integrated in the app enables airport security cameras to detect objects such as suitcases and bags not moved for a period of time (therefore suspected of containing explosives) and notify security personnel. 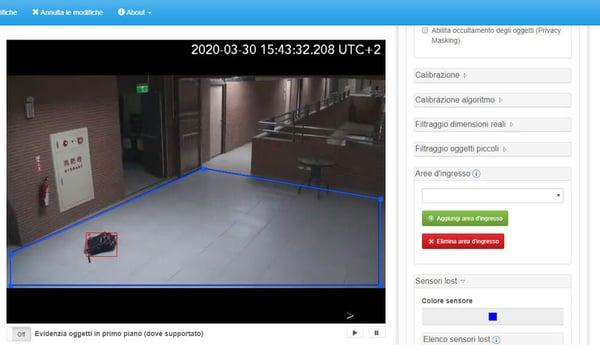 Learn more about and get AI-Lost

The video below shows how human behavior that deviates from "normal" patterns can be detected by security cameras in real-time, ranging from minor disputes between people to vandalism. Similarly, aggressive or violent behavior in airports can be detected early.

Terrorist attacks often have a prelude: people stay in one place for a period of time to scout the situation without being noticed by security staff. AI Video Analytics helps detect even inconspicuous individuals based on specific behavior patterns. AI-Loitering is a camera app that detects odd behavior of people lingering around certain areas for a long period of time.

Gun Detection Real App for security cameras recognizes in real-time if someone holds a gun and automatically triggers alarm. AI Video analytics integrated in the camera app is able to distinguish weapons from harmless objects like smartphones, keys, pens or umbrellas. 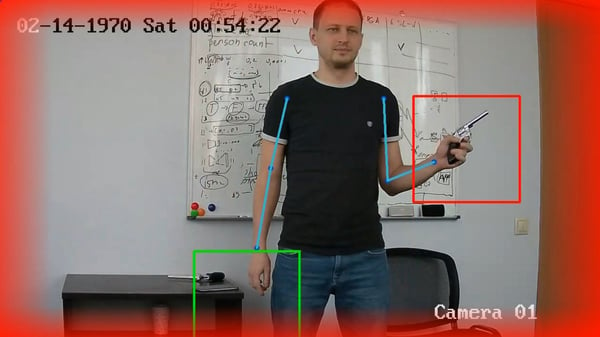 Learn more about and get Gun Detection Real App

In very complex buildings like airports it’s an ongoing challenge to keep restricted areas free from unauthorized people. Each security gate that is opened unintentionally triggers alarm and security routines shutting down airport operations for a period of time. Smart video surveillance combined with passenger information systems can help prevent these types of incidents.

Example: AM Line Crossing allows airport security managers to set up security zones in public areas where, for example, passengers are automatically notified when approaching restricted areas. Connected to digital information systems, smart cameras not only recognize people entering defined areas, but also automatically guide them to their destination.

Learn more about and get AM Line Crossing

In tall airport buildings, conventional smoke and fire sensors mounted under the ceiling are limited because they detect and report threats too late. Optical sensors, such as security cameras equipped with AI video analysis, can detect smoke and fire from long distances and automatically take timely action.

Example: AI-Fire detects flames at significant distances in areas unsuitable for traditional fire alarms such as huge indoor areas in airports or stations. Combined with AI Smoke, another AI app for security cameras, airport security managers get a powerful early warning system that reliably detects and analyzes all stages of fire progression.

Learn more about and get AI-Fire and AI Smoke

Waiting in long queues at boarding and security checkpoints challenges passengers' patience and can seriously damage travel experience. Airport staff have to take the rap when negative passenger emotions are released. AI video technology can help avoid waiting lines and hassle. If queues get too long, smart surveillance systems automatically give instructions to staff or inform visitors via digital displays in the waiting area.

At Budapest Airport, for example, visitor management works with an existing camera system equipped with smart software applications. Video data is analyzed in real-time so that waiting times can be predicted with 96 percent accuracy. These numbers are communicated via displays, for example, to direct visitors to other checkpoints.

Social distancing is key to preventing, or at least slowing down, the transmission of COVID-19 from person to person. Where many people come together, surveillance is needed to ensure appropriate behavior. The same applies to make sure that people wear masks wherever mandatory. IoT cameras, equipped with the latest technology and AI, can help detect behavior and characteristics that do not comply with regulations.

Azena and our partners offer you easy to install AI solutions helping you flatten the curve. Find out how you can benefit in our Application Store.

Sign up for Newsletter to stay informed about Security trends in IoT.

GSX 2021 - We’re back with a special announcement!